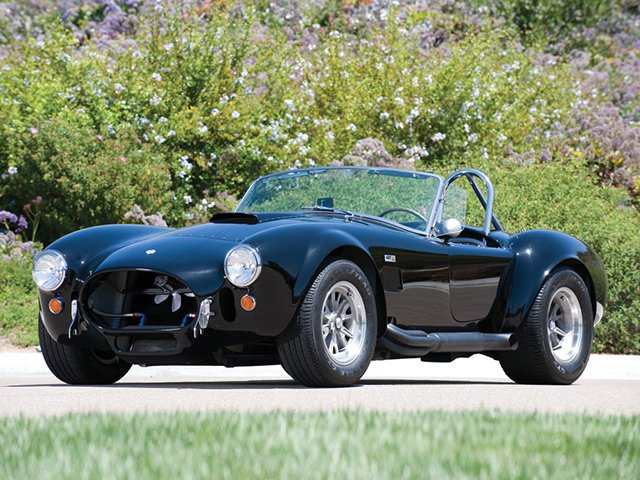 History of the Shelby Cobra

Even before he started racing professionally and won the 24 Hours of Le Mans, Carroll Shelby had a dream of building sports cars under his own name. But in early sixties, that dream seemed impossible. His health condition forced him to stop racing and his other business ventures didn’t look promising. But in 1961, he got the news that AC Cars from England would stop production of their AC Ace model since the Bristol six cylinder engines weren’t available anymore. True entrepreneur at heart, Shelby realized that the light and nimble British roadster could be a perfect match for a powerful American V8 engine and that this could be the chance of becoming a constructor, and not just a retired racing car driver. Very soon, he contacted AC Cars and they sent him an engine-less body to his shop in California. With some help from Ford Motor Company and a small team of mechanics, the first Shelby Cobra was introduced in 1962. It was powered by Ford’s 260 engine, and later with a venerable 289 V8, and it pretty soon took the sports car world by a storm. The combination of lightweight body, small dimensions and brute US power proved to be revolutionary and the car did extremely well in competition all around the world.

However, Shelby’s ambition wasn’t about to end there as he knew that Cobra had more potential. So, in 1964, Shelby started working on Shelby Cobra 427, an even more extreme version powered by a monstrous Ford big block 7 litre engine with around 450 bhp and over 600 Nm of torque. It was insane to put this kind of power in such a light car, but Shelby was not the guy who cared about sanity of his vehicles. He rightfully thought that there is no such thig as too much power and he was determined to build an ultimate classic muscle car. Instaling a 427 V8 proved to be more difficult and Cobra body needed to be stretched and widened with necessary improvements to the chassis and suspension. The overall design remained the same, but although 289 and 427 Cobras looked very similar, none of the body panels, except for hood, trunk and windshelid, are interchangeable.

Equipped with the beast of an engine and four-speed manual transmission, Cobra 427 was astonishingly fast even by today’s standards. The 0 to 60 mph time was just over 4 seconds and 0 to 100 mph sprint took the amazing 10.3 seconds. For years, Cobra 427 was the fastest American car in every aspect. The brutal acceleration was one of the best selling points, and one legend says that Shelby put a 100$ bill on the dash of Cobra 427, saying that anybody who could reach it during acceleration can claim it. Apperently, nobody walked away a 100$ richer. However, such fantastic performance proved to be too much for some owners and lot of Cobras were crashed since the drivers weren’t used to that level of power and speed.

Since the Cobra 427 was an extreme sports car, there is not much in terms of equipment which was installed. The driver had full instrumentation which was a necessity, rather than luxury, and nothing more. All Cobra 427s were roadsters and there wasn’t a regular convertible roof, just a piece of canvas with plexiglas side windows in case of rain. Lack of weather protection could be interpreted as a safety feature because driving a 427 Cobra on wet surface at any speed could easily be fatal. Cobra 427 had very stiff suspension and passengers sat low, open to elements with almost no protection from the wind, followed by roaring sound of the mighty V8 engine which is a big part of 427’s appeal and magic.

The original Cobra 427s are one of the most sought after and expensive classic cars, often cherished and preserved by their owners. The prices are well over 1 million dollars for a perfect example, but original Cobras rarely are for sale. Basic running costs are not high since Cobra 427 uses a drivetrain from Ford, and spare parts are common and cheap. Some of the bodywork parts, suspension parts and details could be very expensive since they can only be found as new old stock and they are very rare.
However, since the early '70s, a lot of small companies produced Cobra 427 replicas which tremendously helped popularity of the car. Since the original car was rare and expensive, many fans found that having a replica can provide them with the same experience for fraction of the cost. Most of the replicas have been built from plexiglas and with various bits and pieces from other cars, but during the years, just a few companies started producing exact clones of Cobra 427 which are identical in every aspect. The original AC is the best known, and there is Shelby American in Las Vegas that still makes continuation series Cobras. You can buy a Cobra 427 kit car cheap and personalize it with different engines, transmissions, brakes and suspension. Lots of replica owners have been installing small block Chevrolet engines in their Cobras, since the engines are cheap and common, which is considered blasphemy by the Ford purists. It is estimated that more than 60.000 Cobra replicas have been made over the years.

The original Cobra 427 was made from 1965 to 1967 and in that period Shelby produced 348 copies. Most of the 427s have been produced as street cars (260 examples) but Shelby offered a “Competition“ package for owners with racing aspirations and “Semi-Competition“ package for people who wanted a street car which they could race from time to time. It is unclear how many were crashed and destroyed, but the most surviving examples have been accounted for by Shelby historians and clubs. Nevertheless, it is one of the most legendary American cars and the most successful British-American hybrid which helped Shelby become more popular as constructor than a racer. Over 50 years old, it still is one of most desirable sports cars for every enthusiast.